What is LifeArk?
Why
Reviews
Blog
FAQ

The Evolution of Social Media

Where are we going? The Evolution and Power of Social Media

The meaning of “sharing”, “liking”, and “following” changed when Facebook entered the digital space sixteen years ago. What started as a way to connect students and create a social experience online has evolved into one of the largest media conglomerates in the world and spawned the creation of thousands of social networking apps that have changed society in profound ways we have yet to fully understand. Whether we are conscious of it or not, we need a new and healthy way to capture precious memories and share them with those we love.

If you give a narcissist a camera, they’ll ask you to take their picture

Instagram masterfully cultivated a transformation from the physical to the digital realm by creating a space to share photos, placing an emphasis on the self. As both the photographer and the subject, the artist became the muse and the ‘selfie’ was born. Instagram gave people a platform to express themselves however they wanted beyond the limitations of a Facebook wall. Sharing photos of friends and family was another way of building identity and social capital online. Followers eventually became a form of currency accumulated or lost based on one’s ‘performance’ and popularity.

Unfortunately, our need to see and been seen has often times led us astray, feeling disconnected from others and ourselves.

According to data collected by the Pew Research Center, 45% of teenagers claim that they use the Internet “almost constantly.” Further, the data also illustrates the detrimental effects of heavy social media use on teenagers, with roughly one quarter of respondents reporting that social media has a mostly negative effect on their lives — as it often leads to bullying, unrealistic views of others’ lives, peer pressure and the propagation of harmful rumors.

The introduction of video to Instagram gave people a voice. Some obsessively documented everything from what they ate to what they wore and where they were, spurring a new opportunity for ‘influencers’ and brands to make money. Marketing and PR tactics changed overnight and a brand new industry emerged, inciting new ways to allocate advertising spend and interact with a wider audience.

As consumers, will we ever really have enough? Will our next online purchase be the dopamine hit to finally cure our depression or will we recoil into the sea of sponsored ads influencing yet another unfulfilling potion or gadget to collect dust on the shelf. What is actually important in life?

Snapchat sauntered into the space targeting a younger demographic with video. The concept of content living online for only 24 hours encouraged users to share more and gave users a feeling of authenticity, which was often lost on overly edited and curated Instagram feeds. Having just recently acquired Instagram, Zuckerberg’s team sought to capitalize on “views”, the newest form of social media currency, and stole the concept right out from underneath them.

What are we left with?

Feelings of loneliness, anxiety and isolation are pervasive amongst social media users, young and old, who are spending more time on their phones. “The less you are connected with human beings in a deep, empathic way, the less you’re really getting the benefits of a social interaction,” points out Alexandra Hamlet, PsyD, a clinical psychologist at the Child Mind Institute. “The more superficial it is, the less likely it’s going to cause you to feel connected, which is something we all need.” Some platforms have even been called out publicly to promote those which are considered to be ‘good looking’ (The Intercept, 2020). TikTok’s flame was ignited during quarantine when millions of bored lonely people stopped making banana bread and started dancing with their families. As people head back into the cities and return to work, where are families expected to connect?

Where do we go?

Is Facebook the place for families to connect and interact online? Or has it’s commercial and political interested morphed it into something else?

‘Facebook and Twitter have famously become a modern day “town square” — where politicians, businesses and thought leaders rally for a cause (or sale) and call people to action. The negative impacts are felt today more than ever as families with dissenting political beliefs take to their feeds to share their points of view. What was once a space for family and friends to connect has become an ideological battleground equipped with “fake news” and false sometimes dangerous information making it difficult to determine the news from the noise.

With the Presidential election only 5 months away, these platforms have become the digital battleground for families and friends who once found comfort connecting over recipes and baby photos. During such unprecedented times, the importance of family is pronounced. How do we connect with our loved ones digitally in a meaningful way?

The negative impact social media has had on society is ubiquitous. While wonderful communication tools, Facebook and Instagram are overrun by those who profit from it. When the influencer marketing bubble pops and Instagram is a distant memory of the past, how much will you value the blurry photo of the $30 dollar lobster roll you ate in Montauk in 2016? When there is no filter, what do we really see? When we remove ego from the equation altogether, what do we really want to share and who do we want to share it with? 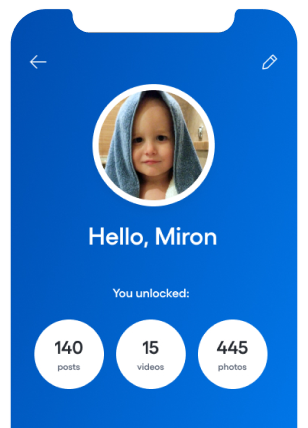 Get the app and start
a journey with your child

The Evolution of Social Media

From a father to his son